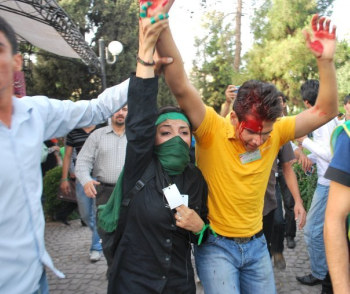 When protests broke out in the aftermath of the recent election in Iran, many Western journalists were banned from reporting. Several German correspondents for example were told to stay in their offices and not go outside as long as the protests continue. Many did as they were told.

But what are journalists for if they cannot report from an ongoing crisis? In fact, there was little the ARD correspondent could say when he was interviewed in the channel’s flagship news programme, tagesschau, tonight. So where are we supposed to get our news if not from journalists? You guessed right: from the internet, and namely from Twitter and other social networks.

Over the past days, a number of websites have been set up that collect videos, tweets and pictures from protesters and police abuse, informing the broader public at a time when traditional news is unable to do so.

In a special report on ARD, one of Germany’s public broadcasting corporations, Stefan Meining frankly admitted the dependence of traditional media outlets on internet sources:

“Above all, its young people who endanger themselves by taking these pictures and putting them online despite the official censorship.”

Essentially, that means that young Iranian teenagers and students do the “reporting”, while Western correspondents simply search YouTube for video footage and put a story together while sitting in front of their screens.

But it is not mainly the journalists who are to blame for the insufficient coverage, and many still do a marvelous and dangerous job. In fact, Western journalists are under strict observation by the Iranian authorities. For them it just seems to be easier to control some hundred journalists than millions of citizens. Therefore, reporting from Iran is a huge risk in these days.

What is interesting to note though is the way that media is changing as a result of the internet revolution: It has always been the task of the media to control the government. But in the internet age, when the media was freed from the constraints of the printing press, it seems that you are no longer dependent on journalists to fulfill that role – in many (though not all) cases a broadband connection will do.

Daniel Florian@d_florian
1.8K Following 2.1K Followers
There are "Twitter experts" and there are experts on Twitter. @LianaFix is one of latter: https://t.co/hu3bvfsRb6
2 days ago
@pavel Name der Straße in der du aufgewachsen bist und Name des ersten Haustiers: Gottfried Caesar GmbH
2 days ago
2
🇺🇸 Interesting observation by Blair Levin, former Chief of Staff at the FTC who believes that tech regulation is no… https://t.co/v3VZGRYJef
3 days ago
Interested in 🇪🇺 tech policy? I created a group on Geneva as a forum to discuss trends and exchange views on tech r… https://t.co/8rnjtCB9Ei
3 days ago
Before the invention of the office in the late 19th century, the whole city was a workplace. So why can we not rein… https://t.co/tHJmkxfyNC
4 days ago
Popular Posts